This past week was another full one, but boy was it fun! In between studying and planning for my research tour, I squeezed in some amazing art experiences.  It didn't hurt that the Oklahoma Arts Conference was going on in Tulsa on Wednesday and Thursday.  I took off Wednesday morning with the hopes of learning as much as I could and meeting as many people as I could.  Life definitely delivered!  After I checked in to the hotel, I sat down at the bar in the hotel restaurant to have a sandwich.  I started talking to the very kind man next to me (Yes, I'll talk to just about anybody.) who turned out to be Stan Carroll.  Stan is a part of the design team for the SkyDance Bridge being built here on the south edge of OKC. I can't wait to see it when it's finished!  It was great to get to talk to someone who has watched Oklahoma City grow and change, and he gave great encouragement to me for the Sixtwelve project. 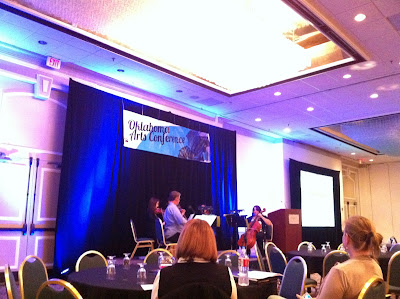 After lunch, I headed into the opening session and found that there were many people from across the state that I knew.  It was so exciting to realize that between teaching music in Norman, working at the OKCMOA and starting this project, I really have met a lot of wonderful people who have the same intention in life, to do whatever I can to help support the arts in Oklahoma. It's easy to feel like the newcomer when you start over so many times with your career, but because everything I've done has related to music or art, I've had the privilege of knowing and working with some of the same wonderful people multiple times.  I'm really lucky.
After a day of sessions and a reception, a group of us walked downtown to Elote. On the way I saw this building and it reminded me of some fun times with fun people when we went to see Yonder Mountain String Band last spring! The Marriott is in the Atlas Life building and that's where we stayed. 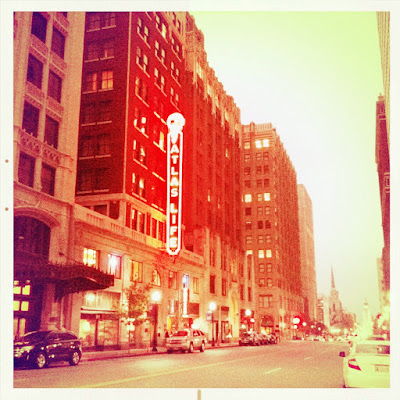 Next, I went to meet a friend, a guy that I've known since the 6th grade. I was so happy that we could get together! We went to the Brady Tavern and the food was delicious. It was great to catch up and to hear about his life because I think I've only seen him a couple of times since we graduated from high school. (No, I don't feel compelled to say exactly how long that's been. Haha!) He has had some great adventures of his own and has accomplished a lot, but most importantly, he seems to be as kind as I remembered and that is what I really respect. I felt honored spend a little time with him and hope all good things for him.
After dinner, I walked over to Tulsa Living Arts to catch a little of my friend Molly's event, Cafe Kzany.  God I love that girl.  She appeared as her alter ego, Emily Kzany, a goth-like, teenage, angst-ridden, girl who reads sad and dark poetry at the Starbucks in Yukon.  Hahaha!  She actually wrote and read a poem at my 40th birthday last year and it was one of the highlights.  She is so special and made me feel the same!
Side note: If you're ever in Tulsa, check out the Brady District and what Tulsa has going down there.  It's pretty awesome and there are great things in the works!
Following Cafe Kzany, I walked all over downtown Tulsa (thank you Google Maps for sending me on a goose chase) to eventually find my destination, The Max, a retro barcade. (It was one block from where I started out. Haha!) It was totally awesome. I met up with Romy, Sarah, Bryon, Lance, Kim, Kelsey and Kolby to play some Space Invaders and Skee ball. I love Skee ball. This was no ordinary Wednesday night!
On Thursday, I went to a session that was a bit like speed dating (that was actually in the title of the session) with the Oklahoma Arts Council.  I was so fortunate to meet members of the staff and have one on one time with different individuals.  I could ask about programs, grants, the Leadership Arts program and more.  I also got to tell these kind people about Sixtwelve, so it was very beneficial.  During the conference I additionally went to a sessions on advocacy and programs. I also had the pleasure of attending one focusing on The LowerTown Arts District in Paducah, Kentucky. This program was very inspiring because a whole neighborhood was turned into an artist district with live/work spaces.  It encouraged community and gave artists a place to call home.  Check it out!
What we're doing at Sixtwelve is a very small version of Paducah or even 910Arts in Denver (Check out my former post), but it's a great place to start.  I talked to James when I returned about our ideas to replicate what we're doing in other parts of the city when we've figured out how to do it right the first time.  The sky is the limit if we do it well and have enough funding. It excites me to think that we could contribute more!
While at the conference, attendees had an opportunity to contribute to a mosaic that will be placed in downtown Tulsa (I can't remember where), so I stopped in to add a few pieces. 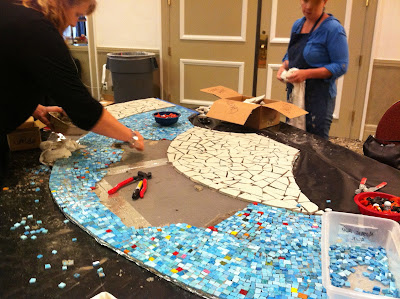 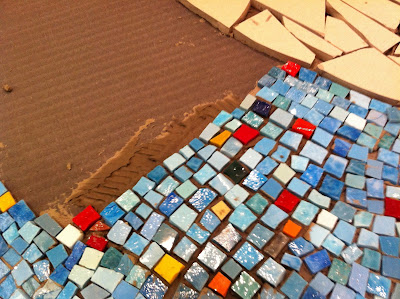 This was my area before I started. 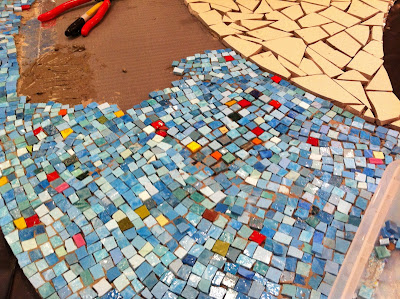 This was the after shot - about 30 minutes of work. So theraputic! 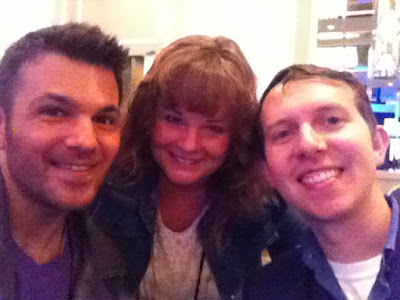 It was great to see Aaron and Josh at the conference.  Josh was honored as he completed this year's Leadership Arts class.  Way to go Josh!
I had a great time in Tulsa and learned so much.  I definitely appreciate what the Oklahoma Arts Council gave the attendees. I'm very lucky to be doing what I'm doing with my life and to be working alongside a group of people who want so much for the arts in Oklahoma.
Posted by amyy at 8:42 PM