After Jeff dropped me off at the train station in Washington, DC, I journeyed up the coast a little until I reached Philadelphia, PA. My friends Sarah, Ashely and Eva (Sarah and Sean's daughter) picked me up at the Philly station and then we all went to Sean and Sarah's apartment.
James had flown in the day before and stayed with them.  Sean and James have been friends since the sixth grade, so they were having a great time.  After eating some delicious Philly sandwiches, we all loaded up in the cars and went to the Art Star Craft Bazaar. It was pretty darned cool. 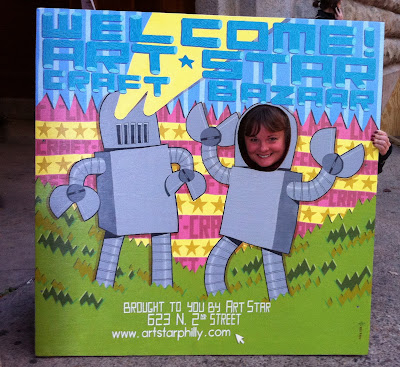 That night the ladies (Sarah, Ashley, Tara and me) went out to dinner and let the boys have "Bro Night." We went to a place called, "Honey's," and it was yummy.  This restaurant is a southern cooking, soul food kind of place that gets its produce from a local farm.  Apparently I didn't think I'd had enough southern food in Savannah, Charleston and DC. Haha!
Afterwards, we walked back to Sean and Sarah's apartment and just happened to pass Architectural Digest's Home of the Year from 2010. The guy playing pool in the window stopped and looked at us for a while.  I'm sure he knew that we were taking a picture of the house, but I got the feeling that he was posing too.  That made us all laugh.
I woke up early the next morning and scooted over to the Philadelphia Museum of Art before catching the train up to NYC! What a great morning that was! There was only one small problem.  The Philadelphia Marathon was taking place right outside the Museum!!!!
Once inside the Museum, I located the Portrait Miniatures gallery, which was actually quite difficult because these American works were placed inside a European gallery. I understood the reasoning, keeping all of the portrait miniatures together, but I still think I might make the suggestion to move them in a "comments" area. The most I could hope for would be a response, explaining why the PMA would keep them there because I'd really like to learn and grow by knowing. While we're on the subject of the miniatures, can we talk about how dreamy ol' Edwin Martin is? It doesn't hurt to have your portrait painted by the leading miniature painter of the Federal era, but goodness. I wouldn't mind wearing that miniature around and showing it off to my friends. Haha!
After leaving the PMA, I needed to get back to my hotel, pick up my bags, pick up James who was eating with Sean and Sarah and then get to the train station so we could ride up to New York, New York! I only had an hour in which to accomplish these goals so when I walked out of the Museum to find the race was almost over and the post-party was just beginning, I started to panic a little. I couldn't find a cab because the streets were full and blocked off.  Help!

I called James in a very worried state and even took it out on him a little.  He was pretty strong and calmed me down. This is one of the best things about working with James.  He's positive, supportive, doesn't allow me to fall into a pity party and encourages me to affect the outcome of things hoped for by having a good attitude. I want this in my life and that's why I wanted James around for the last part of the trip.  I knew I would need it because I had the biggest challenge ahead of me. I was going to talk to Dr. Robin Jaffee Frank when I traveled from NYC to Yale in New Haven, CT. She's the author of the book which is most influential in my thesis. I needed to have my studies in order and to know my stuff before I felt comfortable taking one minute of her time.  I also needed to have confidence and I did! But that story will be in the next entry.
Oh! And p.s. I found a cab right after I decided to have a good attitude, be open to the idea that a cab could finally come along (after walking around for 30 minutes looking for one) and James and I made it to the train station just in time! We even had a little extra time to enjoy some breakfast sandwiches that he brought along for us.  Yay!
Posted by amyy at 1:49 PM