Yesterday was a wonderful day. We docked in Belfast and traveled by bus to Giant's Causeway. I loved this day specifically because we were able to see so much of the Northern Ireland countryside. It's just gorgeous, with all of the glens and valleys. Giant's Causeway is an area on the coast, consisting of about 40,000 interlocking basalt columns. When mom presented the tour options we had, this was one I didn't want to miss. 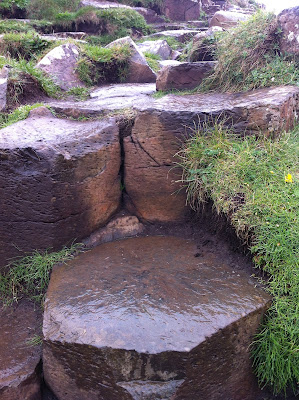 The accepted explanation for this site is volcanic lava flow that occurred over 60 million years ago, but the myth surrounds a story of a man named Finn McCool who built the walkway in order to fight a Scottish giant. I like the legend better. :)

After we left the Causeway, we drove for hours through some of the most green and lush countryside I've ever seen. All of the houses and farms fit exactly what I had dreamed Ireland would look like. It didn't hurt that the driver played traditional Irish music throughout the entire return trip. I'm really glad that we took a break from touring cities so that I could see the scenes of my imagination.

When we arrived back at the ship, we ate dinner and then got to bed in early. It had been a long day and I was tired, but I also set my alarm to get up at 2am so that I could at least listen to the first game in the Thunder/Heat NBA Finals series. Unfortunately, we don't get the games on the ship (as I had originally thought) but I at least thought I could listen to the game online. Unfortunately, that didn't work either, but dad sent me text messages with updates at the end of each quarter and I wore one of the two Thunder shirts I brought for good luck. It must have worked because we won! Woohoo!!!! So, so proud of our team. I love the Thunder!