Yesterday was a fun day. Because of problems with the ships control board (that scares me a little, ha!) we left the port at Southampton a day late. This put our whole itinerary off and we were a bit concerned that all of the tours we had booked would be cancelled.  We had decided that if the whole cruise was cancelled, we would just head up to Ireland and stay there until our flight home from England two weeks later.  Luckily, the problems were fixed and we headed out. Unfortunately, the tour our group booked for Guernsey Island was cancelled and mom and I were both pretty disappointed about that. We were really looking forward to this stop on the cruise.

We both read a book a few years ago titled, "The Guernsey Literary and Potato Peel Pie Society" and loved it. It centered around the German occupation of the island (located in the channel between France and England) during WWII and it was such a sweet and enlightening story. Apparently we aren't the only ones who appreciated the book because there are now tours centered around it. When we found out that our tour was cancelled, one of our friends on the tour, Kay, suggested I get on this computer and find a coach company and reserve a bus for our group of eleven. Of course, everyone else on the ship with a computer did the same thing and the kind lady in charge of the reservations told me that they had three coaches available for everyone, but guess what! We got one! And the bus came with a very knowledgeable driver so we had a half day tour of the island that included a stop at "possibly the world's smallest chapel," The German Occupation Museum, the German Underground Hospital and views of the rest of the island.

Guernsey was a demilitarized zone, but because it was a huge exporter of tomatoes, there were many identical trucks ("tomato lorries") up on top of the island. The Germans mistook these trucks for military trucks and dropped their bombs, killing 34 people and beginning a five year Nazi occupation. The stories of life during this time are quite interesting. I'm most surprised by the fact that some Guernsey women actually had relationships with German soldiers, but I guess war is hell for everyone and you never know what you'll feel until you're in the situation. I was also impressed by those who worked an underground newspaper, reporting BBC news to Guernsey citizens.

The island was beautiful and the underground hospital was eerie! I'm so grateful it worked out for us to see the things we'd hoped for, but if we'd stayed on the ship or had a walking tour, I would have been just as happy. It's just nice to get away for a while. It's helped to put some things in perspective for me. I think some things will be quite different when I get home.

Here are some pics from our day! 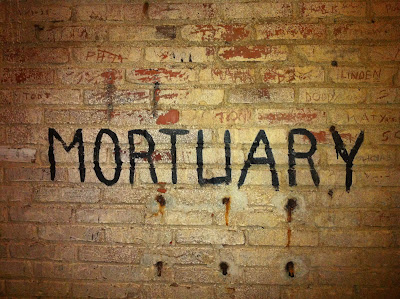