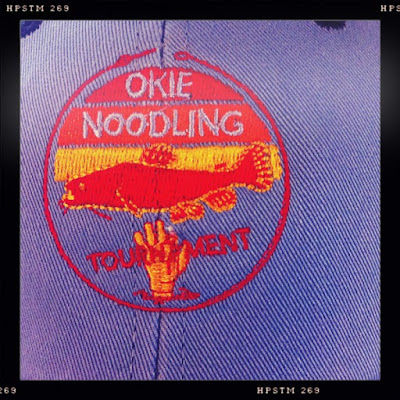 Last night was one of the most fun experiences I've had in a long, long time...and that's saying something because I have fun pretty much everywhere I go.  I have heard about Okie Noodling for years and knew about it mostly because of the documentary, "Okie Noodling." (and there is also Okie Noodling 2!)  I met the director, Bradley Beesley when he came to the T-shirt tent, where I was volunteering.  I told him that I was so happy to meet him, not only because I was a fan of his work (I also love his film, Summer Camp!) but also because I had heard about the name of his high school mowing business.  My friend Jay Wendorff had told me about it a while back and it always makes me giggle. :)

I aslo got to see some people that I hadn't seen in a long, long time! My cousin Kathleen came up to the t-shirt booth and surprised the heck out of me.  I haven't seen her since high school, so that was just wonderful. How could family go so long without seeing each other??? I had the pleasure of meeting her son who wants to design video games. Awesome.  How cool would it be if we could have a game design class at 612? I don't even know the first place to start with that, but you never know what can happen. It was really great to see them there! I also saw a friend from growing up in Ardmore and I don't think I've seen him since early college at OU.  He not only worked on the Okie Noodling documentary but also helped start and continue the festival. I'm so impressed! It was great to catch up with him.

The people I met while working at the T-shirt tent were hilarious.  I felt completely at home just talking and joking around.  Everyone there was having a pretty good time and I was one of them!  I really can't wait to go again next year and when I do, I'll go early enough to take pictures of the catfish and people who entered the tournament. I could't do that this year because I was working almost the whole time I was there. I don't know if I could be brave enough to stick my hand down into a hole and wait for a fish to bite me just so I could catch it, but it might be fun to enter the Okie Noodling Queen pageant...if I qualified to enter! Wouldn't that be fun?

Here are some sound bites from the Okie Noodling 2 site: