Catching up! (Thanks to the Rain)

It is raining so much outside that we can't get into work. So I thought I would post a quick catch up on what has been going on since we returned from the trip TWO MONTHS AGO! I can't believe I've been so lax on writing, but I am ready to get everything down so that I can let everyone know. Brace yourself, this is a long entry, but the rest of my posts are more brief.

I made this blog public last week because I was finally able to tell the people that I needed to know about my plans. I didn't want anyone to hear it from anyone but me. Soooooooooo....here we go!

I've already written about the Blue School and how great it was, but I didn't post any pictures. I don't know their policy about that and honestly, I admire them so much that I think I'm going to refrain. I wouldn't want to do anything that could potentially ruin their good will towards us. I'll just say that we found some wonderful ideas for the building and for the way I want to run the pre-school part of our community space. I knew when I was sitting in the classroom of 4 year olds that I could do that. I know, without any doubt, that we could offer a wonderful place for children of OKC to learn and grow.

After we left NYC, we went to Baltimore for the National Art Education Association National Conference. Wow! I learned so much about Senior Outreach, Art Therapy, creating art and connecting with others from all over the world that have the same interests. It was great to establish relationships and to share ideas. I found that people from all over the world were excited about what we want to do. Maybe even more importantly, I found reassurance in my hopes and dreams because I realize that what we want to do is something people want everywhere. There is a new form of education that's headed our way, and somehow I feel like our school will be a part of helping it to grow here in Oklahoma.

There was one day that James and I took off from the conference and went to Washington D.C.. We went to the National Museum of the American Indian. I had been studying it and reading about it for the past two semesters in class, so I needed to go. I was so glad that I did because I realized that this is also a place that is incorporating new ideas and ways of presenting information to people. It seemed confusing to people at first because nothing is really presented in the way that museums have traditionally presented pieces and info. I actually love that. 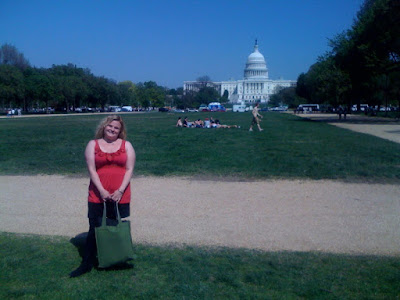 I had read that people would get frustrated when approaching the exhibits and while that frustration can hinder people in their appreciation of what the Museum is trying to do, it can also challenge people to think in new ways. What I LOVE about the Museum is that the curators and administrators actually consulted with many, many tribes from North America and had community curators amongst each tribe. They asked the community to be involved in the way that they were represented. That honor and respect is what we want to give people too! And we obviously need a new way of thinking because our education system can sometime overload teachers with so many requirements that they don't have time to teach, let alone incorporate creativity into everything they do. Our teachers need support and understanding and there are some amazing ones out there. We just need to support them. I think that Oklahoma A+ Schools is doing a great job of giving teachers what they need to do this. I really, really admire them. In fact, I would really like to take their trainings and classes. I know that they would be worth their weight in GOLD! 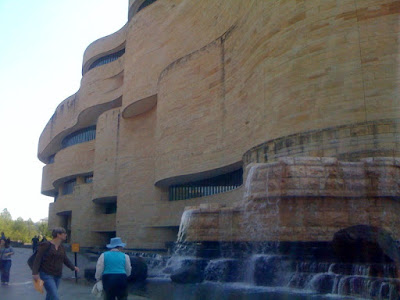 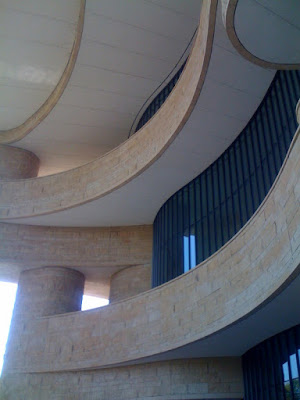 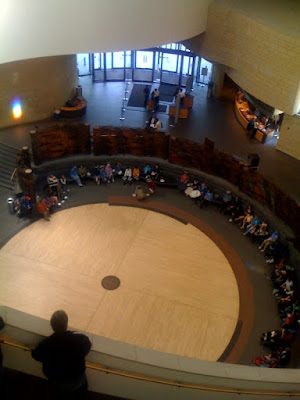 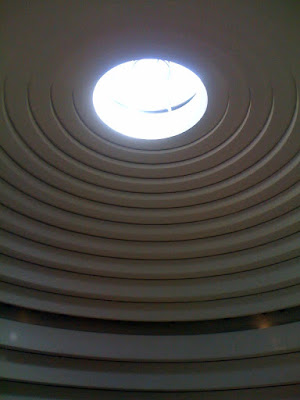 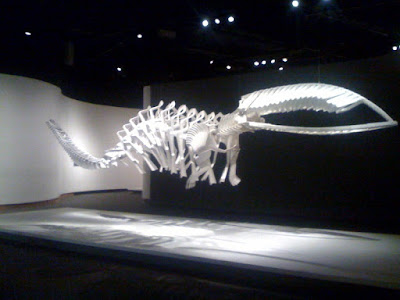 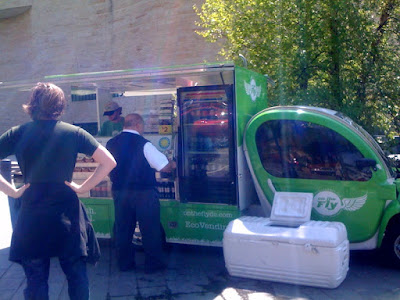 While we were in DC, we also went up to Chevy Chase, Maryland. This is where James spent the first five years of his life. We visited his old school, the tree he used to climb, the house he lived in and walked through the neighborhood where he used to walk and ride his bike. It was special to see where James was first experiencing life and forming his ideas of what he liked. I was honored to be there. 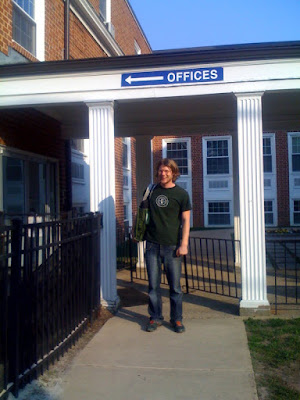 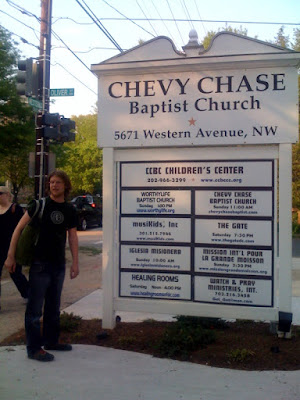 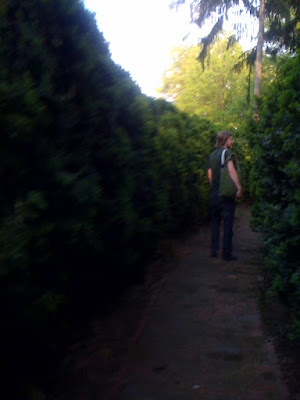 I should mention here that James carried my bag for me for quite a while that day. :) 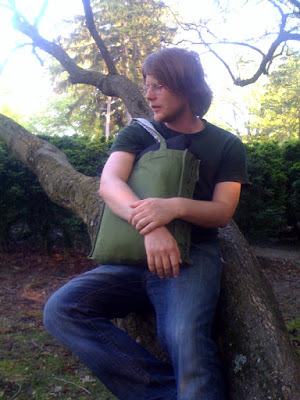 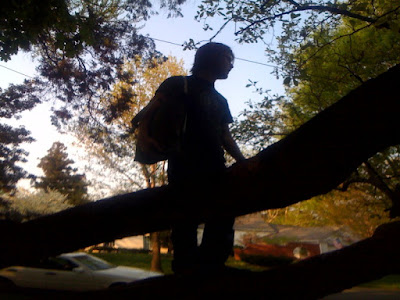 I love this picture. It's in the tree James used to sit in. We both sat in it for a while and it was fun to imagine James
sitting there as a little boy.


The day we returned, we attended the AIA Central Oklahoma Chapter Architecture tour. It was amazing! We even saw Wayne and Michelle Coyne's house...you know, of the Flaming Lips??? So cool! I want their bathroom!!! It was like nothing I'd ever seen before. Talk about a house of creativity. Wish I had pics to post, but photography wasn't allowed. I can just say that if I ever get to build a house, I'm calling Larry Pickering because he is a genius at what he does. And I know it's not just Larry that was involved in all of that, but he's the one I know that had a part in the renovation of that space. I'd like to get him to work on our building...we'll see what happens with that! One of my favorite parts about the architecture tour was that so many people from OKC were out on a rainy day, supporting the arts...yet again!!! I'm hoping that we can get our building on next year's tour.

Have I mentioned how much I love OKC? It's a great community and I love how we are growing all of the time. It helps that it's so close to my family, but mainly, I just love the forward motion in our drive to improve and enrich our city! The people are kind and generous to each other too. So if you're reading this and you are one that has thought that Oklahoma is "behind the times," or not someplace that you'd want to live, then you don't know OKC. And that's ok. You'll figure it out soon enough. :)

There are three more things that I want to include before ending this epic entry. First, we submitted the first part of three in our application for the National Tax Credit and we were accepted! This means we need to submit the second part soon, letting the people in the national office know about what our exact plans are. It will be helpful if we can get that approved because the state legislature has passed a bill to put a moratorium on the state tax credits for historic preservation. I bet we can do it!

Secondly, we had our Historic Preservation hearing a couple of weeks ago and the board didn't exactly like the windows that we proposed for our building, so we'll go back to present again in August. I know we can do it! We can figure this out. That's the best part about working with James. We're both positive people and feel that every experience is worthwhile. We are learning as we go, but we are both committed to this so I know it's all going to work out. Every lesson is worth the time that it's taking to get our project to the place it needs to be. We need to know these things so we can do it again!

Ok, I think that's enough for this post...except to say that I turned my resignation in at work and my last day at the Museum will be August 3rd. I'm scared and excited all at the same time. I'm going to return to OU in the fall to finish my masters over the next year and then the following fall (Fall 2011), if everything goes according to plans, we will be opening the school. I feel like life just keeps getting better and better. I can't believe how blessed we are, but I'm grateful.
Posted by amyy at 10:16 AM