After a 12 hour day on the road and then 6 hours of driving the following day, you'd think I'd be exhausted, but when I arrived in Savannah yesterday I felt just the opposite.  In fact, when exited Interstate 16 onto Liberty Street, I was so excited to be back that I found a huge surge of energy! It was a good thing too because I had forgotten all about the time change that occurred when I crossed the state line between Alabama and Georgia. This put me into town with about an hour to check into my apartment, unpack and drive to Trustee's Theater to meet a new friend. So proud of myself on that one. (sarcasm)

The apartment manager gave my extra ticket to the Wyton Marsalis concert to one of his friends, Jason, aka "Pork Chop." Haha! And Pork Chop was so nice! He grew up here in Savannah and seemed to know everyone.  He kept introducing me to people on the sidewalk, in the theater and afterwards too. I LOVE that southern hospitality! And can we talk about how awesome Wynton Marsalis and the Lincoln Center Jazz Orchestra was? It was a great way to start the month that I have here in my favorite place. The show was celebrating Wynton Marsalis' 50th birthday and was a retrospective of his own compositions. His talent is inspiring! 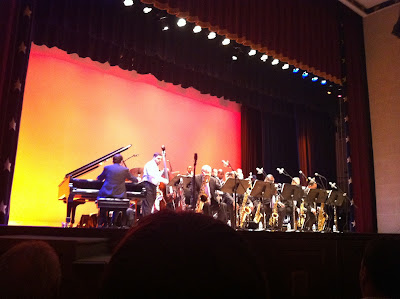 After the show we went to the American Legion building just south of Forsyth Park and had a hamburger and cocktails. That was one delicious hamburger and the drinks were only $1!  One of Jason's friends came to join us and again, he kept introducing me to people there too. It made me feel better about being here alone.  I felt like I could talk to people just like I can back in OKC, which is a good thing, because anyone who knows me, knows I like to talk. :) 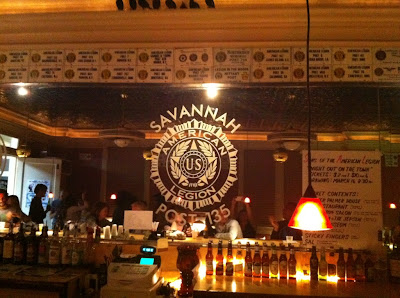 Jason has helped to plan the Savannah Stopover Music Festival that's happening next week. This is a festival where bands play on their way to South by Southwest in Austin. What a smart idea! Talking to him about all that goes into organizing performances was incredibly helpful to me. I asked him all kinds of questions and got some new ideas for ways to improve my process for the Paseo Arts Festival music. I have hopes that I'll improve every year in that process, but I have a feeling that next year will be the best year yet because I'll have more time to devote to it than I have this year or last. School has to take priority this year.
Today, I went to the grocery store and got the basics for my kitchen.  Oh how I love my kitchen here.  It's so cute that it makes me want to cook and clean.  That's impressive. Haha! After I made lunch and got some instructions from my landlady and the apt. manager, I went for a walk.  I texted way too many pictures to friends and posted some on my Facebook page, so you'd think that I wouldn't post them here too, but I'm going to. Haha!

Tonight I studied, made dinner and watched some television. Pretty tame for a Friday night, huh? I didn't muster up the courage to go out alone, but I think that will change soon.  I needed a night to rest anyway, so it was good to stay in. I plan on resting a lot while I'm here. I realize that I haven't been taking care of my health and wellness and it's starting to affect me, so there's no better time than now to learn how to be quiet and alone without feeling like something is wrong. I can't wait to see what this month holds for me.  I know it's going to be productive and fun, but I also think that it will be transformative if I allow it to be. I think the key (as a wise lady told me today) will be to disconnect and take care of myself. I think she's right. (Thanks Courtney.) So I'm going to try to do that starting right now.
Posted by amyy at 11:25 PM