Today was one of those days of ups and downs.  I woke up, ate breakfast and pulled myself together enough to walk to Forsyth Park, which is two blocks south of my apartment, because there is a Farmer's Market there on Saturdays and I had heard great things.  I wasn't disappointed. There was a great selection of produce and meat. I bought carrots, green beans and some ground beef. I'm thinking lunch tomorrow is going to be deeeelicious! 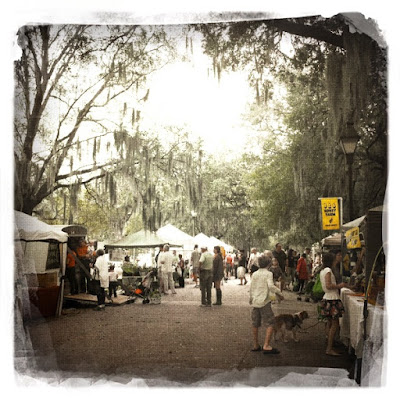 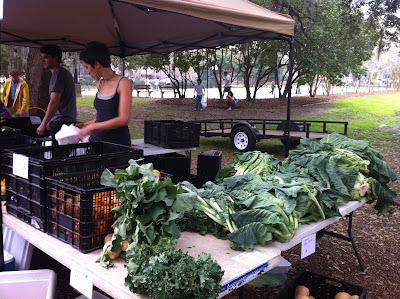 While I was walking toward the market, a couple of old men on a park bench said hello and then said, "OKLAHOMA CITY?" because I had my Thunder shirt on. (I came to represent!) Then they asked me if I was a basketball fan and I sarcastically said, "Just a little bit." Haha! We had a good, uplifting conversation and then I went on my way. I don't know why I get a kick out of talking to strangers, but I do. I guess there's just something nice about giving and receiving encouragement to and from people you don't know.  To me it seems more genuine because neither one of you has anything to gain from it, other than improving each other's day.
And words seem to really be affecting me today. After a great and productive afternoon, I was proud of myself for things I had accomplished, both in my studies and working on music for the Paseo Arts Festival.  One leader of a band that I contacted thanked me for calling and asking them to return again this year, saying that it had made his day. I could tell that he had been feeling less than stellar and I could relate. I've been feeling lonely and secluded today, so I understood how important words are and how they affect you. Today I offended two friends that I actually really care about because I was so busy and overly sensitive, so I'm pointing a finger at myself here. That contributed to feeling blue, as well, but I received a great email from my friend, Diane, lending much needed advice, and then I got a call from P. Both helped pick me up out of my funk.
You never know just how much your words affect people. I guess the point of this blog entry is to remind myself to be as kind as possible.  I saw a quote recently that said, "Be kind. Everyone is fighting their own battle." Amen.
Posted by amyy at 10:39 PM