Last night I attended a meeting on OKC's Urban Sprawl Issues. Ed Shadid, our Ward 2 City Councilman, led the meeting and I have to say that I was really happy to see 500+ people in the room, with standing room only as the event began.  It shows that there are many people interested in changing the environment of our community. Shadid and the panel of speakers began the meeting by speaking about public health and where OKC ranks. It wasn't good news, but I think most of us already knew where we stood and I think it was the most perfect reason for all of us to be aware of the ramifications of sprawl.  Our obesity rate is so high and that means a lot more than I realized.  Check out where we rank in the polls.  I took this picture last night during one of the speaker's presentations. 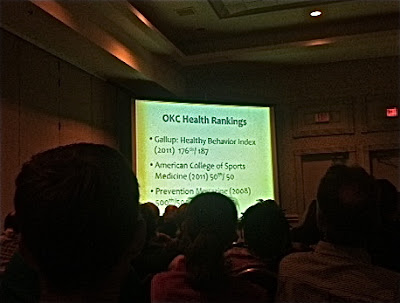 Because we have separated the work areas and the living areas (i.e. subdivisions) in our city, we have to drive everywhere we go.  That means that we aren't walking or biking to work, eat or play.  We've taken natural opportunities for exercise and interacting with our community out of our days.  Now we find that we're paying the price.  Especially when it comes to the cost of oil and time.  We spend so much time in our cars, that we're too exhausted by the time we get home to even find the motivation to walk around the block.  Add in the increase in numbers of cars on the road and the increase in our population over the past 50+ years and we've got problems. Anyone who has driven on Oklahoma roads knows that even with all of the everlasting construction, we're not keeping up with maintenance and needs. Our emergency services such as fire, police, EMSA, etc. can't get to people as fast as needed and it's expected that over the course of 2011, there will be almost 90,000 emergency calls to the fire dept alone.  Last night the fire chief reported that 82% of the fire calls are actually emergency health calls.

So the logical conclusion are that if we incorporated our work and live spaces, we would have more time to spend more time with and contributing to our community.  We'd also have more opportunities to walk or bike to the places where we are spending our time and that would mean a healthier population.  If we're taking better care of ourselves and hopefully doing the things it takes to cut back on heart disease and diabetes, we'd probably cut down on the number of health calls emergency services had to answer.  This would cut down on spending for everyone.  The need for oil is also a huge problem and it's only getting bigger.  I believe that all of this will provide more reasons for people to become increasingly aware of the value of local food.  That's why we wanted to partner with the Oklahoma Food Coop! There are things we can do as a community to make a change and to make this a healthier city for everyone. (It's also why I'm trying to ride my bike a lot more these days.)

These are all ideas that we are going to promote at 612, through education and action.  We want it to be a place that encourages people to value their community and educates us all in ways to contribute in creative ways. We have so much to be thankful for here in OKC and I'd say the greatest resource is its people.  I applaud Ed Shadid and our city council for bringing awareness to our issues.  I think there is a great (and large) group of people here who would like to see some solutions and I know that I can speak for myself and for James in saying that we want to help!
Posted by amyy at 2:04 PM