Where Have You Been All My Life? (Or Over the Past Year?)

2014 is going to have to work hard to trump 2013. When I graduated a year and a half ago, I decided that I needed another kind of education. I needed a quick degree in serving your community in a creative way. I wanted to know the best practices, the issues, the things you don't ever want to overlook, when trying to actually do some good for the people around you.

I knew the most efficient way to do that would be to find other people and projects that were doing great things for their communities. I went to see as many creative and sustainable projects as I could, all over the country, because I needed to figure out how to combine all of the programs I have been dreaming about under one roof. There's nothing like first hand experience and observation to help you decide things like... "no, Amy, you don't need to make your pre-school a Waldorf school. You've had all of the education, training, and experience that you need to do this." (That was my voice.) I would have had to go to school for four more years, and train/student teach at a Waldorf school during those years before ever calling myself certified. The time for study and research is always at hand, but now is also the time to act. You can research too much. Sometimes you just have to jump in and do it!

I also learned that my ideas, dreams and visions are just as important as anyone else's. The choices I make and the priorities I set are there for a reason. They dictate the things that I do and lead me towards my goals. This has helped me learn how to say, "no," without feeling guilty. And what are my goals? It's funny. A year ago, I would have said that my goals were to get SixTwelve open and to provide quality education, encouragement and care for the people of OKC.

Those are still my goals, but now, the highest priorities are to remain true to myself, to spend as much time with my family as I can, and to enjoy every step of the process of getting SixTwelve to the point where it can help people. I used to be so controlled by fear. We all are, to some extent, but I'm not afraid of this mountain in front of me anymore, largely because I've been climbing it for some time now. But I've also had the luxury of taking my time, getting to know myself and my community, and learning how to tell fear to take a hike. You have to get out of your own head and focus on the doing!

It's been a crazy, fun, exciting, scary, mind-blowing, exhausting, but thrilling experience. I've seen things that I know will play a part in our programming and I've met people that have come along, just at the perfect time. I've decided to be as open to whatever came my way as I could, while simultaneously pushing to make things happen. It's a weird, but productive, balance.

I haven't blogged about everything that I've seen or done over the past year because I kind of want some things to be a surprise. I also just took off and didn't give myself much time to write, but here's a little synopsis.

Shortly after Paseo Festival and deadCENTER Film Festival were over, I took off with my friend, Preston, to see San Francisco, Napa, the Redwood Forest, Scenic Hwy 1 along the California and Oregon coasts, and then on up to Portland. I went to San Francisco to see 826 Valencia, but they were closed for renovation when I arrived. Not to worry! I will return. We took a few days to drive up the coast after leaving San Fran, because I had never seen the Redwoods and I found this SWEEEEET little cabin on airbnb.com. I thought I would give living in a smaller house a try and I fell in love. 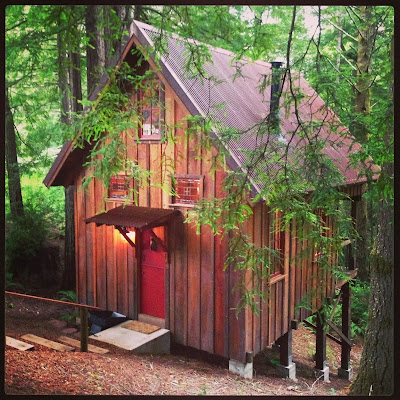 This little place may have done more for my understanding of what sustainable living can be like than anything else I experienced on that trip. We had the best time and I slept better there than anywhere else along the way. We even had a composting toilet. Have I mentioned that James wanted to have composting toilets at SixTwelve and I originally said, "no way?" Ha! I worried there would be a smell and that people wouldn't know how to use them. Our stay at the cabin helped me to realize that people (like me) could learn, pretty easily, in fact. And there wasn't a smell. I also felt happier with less clutter around me. Imagine that. It's had me thinking about selling my house and just building little neighborhood of tiny houses ever since. But one project at a time, Amy. (That's my dad's voice I'm hearing there. So grateful for his guidance.)

When we arrived in Portland, I visited a Waldorf Training program and spoke with the director. He told me about all of the requirements and while I could easily see myself living in Portland the next four summers, and while I truly respect Rudolf Steiner's philosophies on education, I knew that the time had come to leave further training behind and just do it! I believe that I can create a pre-school program that will be really good for many little humans.

I loved that trip. It was fun and full of beauty, but it was time to come home and prepare for the next research trip. I'll write more about that next time!
Posted by amyy at 11:59 PM